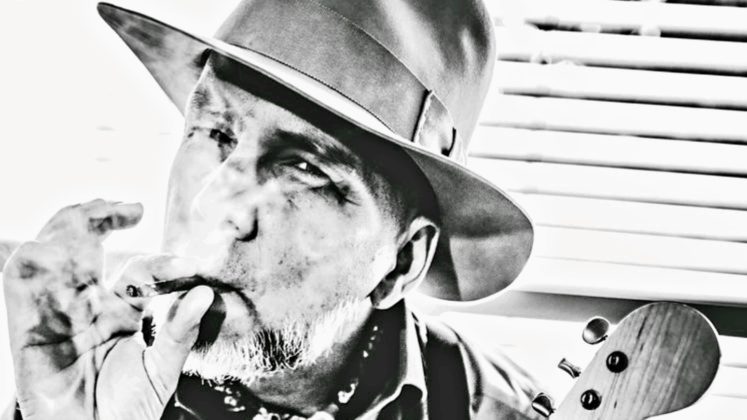 Whenever there is talk of exceptional German guitarists who have defined or reinvented a genre through their playing style, his name is guaranteed not to be mentioned (with the exception of a few music magazines). And that, although he should be there urgently.

Matt Roehr, the “Gonzo” of Germany’s most famous and successful rock band BÖHSE ONKELZ, has been this guitarist practically since his teenage days. Socialized in the Hessian province in the mid-seventies and by the bluesy, jazzy and rough rocky black sounds that were on the radio at AFN and spun by American DJs like “Wolfman” Jack. B.B. King, John Lee Hooker. Johnny Winter. Calibers like that. Inspired by the great rock bands that are still successful today: AC/DC and KISS. Or artists whose golden years were long ago, but who were of immense importance to the young Matt Roehr at the time: Ted Nugent, for example. His live album “Double Life Gonzo” was played over and over again until Roehr knew every word and every chord. Even then he played the electric guitar in his own bands. HEADLINER, SINNER, ANTIBODY.

Influenced by the fat late seventies wave of English punk rock, which washed brute bands like THE CLASH, THE DAMNED, THE STRANGLERS or the SEX PISTOLS to the mainland. The force of this unconsumed subculture ultimately also ensured that the rebellious Roehr, who first wore his hair very long and then looked like Sid Vicous’ twin brother, joined the punk band “Böhse Onkelz”, which had just taken flight. They were exactly what Gonzo wanted from punk and the people who played it. Real pong, no skills and yet the attitude so cheeky and the balls so thick that it was immediately clear what he would miss if he didn’t join: Provocation, fun and lots of anger.

That was 1981. Just a few months after the band was founded. The rest is the well-documented story of the rise, fall and revival of a band that has now existed for forty years in exactly the same line-up that made big trouble in the youth centers in and around Frankfurt/Germany. Tens of millions of records sold, millions of concert visitors, merchandise sales and fan homage that even the aforementioned AC/DC or KISS can only dream of. 100.000 people for the farewell 2005 at the Lausitzring. 200,000 people for the big celebration of the resurrection in 2014 at the Hockenheimring. The Böhsen Onkelz are not just a rock band. They’re a gang. Conspired like brothers. Even with fraternal friction, of course. But since the reunion, no longer with the “my opinion over all others” gesture, but following democratic processes.

And if the long, almost decade-long hiatus had anything good, it was the fact that the band members (and thus Matt “Gonzo” Roehr) were able to find and try themselves musically. Roehr moved to Uruguay. where, under a glaring sun, he composed the songs for his first solo album, that he recorded 2007 in Rio de Janeiro (Brasil): “Barra da Tijuca”. He worked in the studio with many internationally respected musicians, which sounded so different from the music of the Onkelz and therefore valuable. Charlie Huhn for example, who had previously toured with Nugent and thus closed another circle, was at the microphone. World music best describes the genre to which this record belongs. “Barra” still sounds more mature than many other rock productions. You can hear in every note how great the artist’s desire was to emancipate himself from the overgrown Onkelz and their legacy.

“Out of the great depression” followed and already the album again sounded different from its predecessor. American biker rock, desert, dust, western. “Fuel into the fire”, the first single, was played up and down on US independent radios. The video comes across as a serious homage to EASY RIDER. To Dennis Hopper and other screen legends.

And whoever thought Matt “Gonzo” Roehr had found his style after the release of this record, and whoever thought that this was it for further development, was proven wrong again with “Blitz und Donner” and “Zuflucht vor dem Sturm”. German rock, earthy, sharp-edged, streety and punky to the bone. Back to those much-invoked roots that Roehr has indeed never forgotten.

And while the Onkelz delivered another number one album in 2020, the solo artist Roehr is working on a fifth album in 2021, which was released in 2022: “DEAD SLOW”.

On the album, MGR collaborated with Zach Dowd, a young singer from LA, and his son Vincent Roehr on Keyboards.
The single “Same Old Song And Dance” is currently (August 2022) very successful in the US radio charts and lets expect a lot this year.